Skip to main content and our Accessibility Statement may be found in the footer of our website.

We are excited to share this video with our local communities, illustrating the histories of our two hospitals, and the continued dedication of our staff to provide quality care to our surrounding communities every single day.

In September of 1890, a group of civic minded residents petitioned the General Court of the Commonwealth to start a hospital in Framingham, Massachusetts, in part influenced and approved due to the increased use of the railroad that ran through the city.

A gift of $5,000 was made in memory of Adolf Merriam, which spurred simultaneous efforts by a group of individuals – primarily women, who were the forerunners of the Framingham Hospital Aid Association – for the establishment of an emergency ward and independent training school for nurses. Their combined efforts culminated in 1893 when the Sturtevant House, which was located on Winthrop Street, opened its doors as Framingham Hospital and became the only public medical facility in Framingham.

Within four years funds were obtained to start a new hospital building on Evergreen Street, where physicians formed a medical staff organization, establishing rules and regulations governing the practice of medicine. They submitted a request for “an X-Ray apparatus” which was considered very progressive at the time, even for hospitals in larger cities. 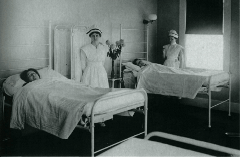 In 1912, Dr. Herbert O. Brenner left the Framingham Hospital on Evergreen Street to start his own hospital, The Union Avenue Hospital and also opened a school of nursing in 1913. In 1925, the Framingham & Union Avenue Hospitals were merged successfully to become Framingham Union Hospital. A 1927 ground breaking ceremony, attended by over 3000 guests, was held for the soon-to-be new Framingham Union Hospital facility. The combined nursing schools flourished, supported in part by the Hospital Aid Association. During WWII, they began the U.S. Cadet Nurse Corps Program, from which many graduates joined the armed forces.

In 1948, the U.S. Congress chose Framingham, Massachusetts and therefore Framingham Union Hospital as the location for its long-term cardiovascular research study. The Framingham Heart Study, which started with 5,209 adult subjects from Framingham, continues today, and is the longest longitudinal cardiovascular study in the United States. Much of what is “common knowledge” surrounding heart disease, such as the effects of exercise, diet and everyday medications like aspirin on heart disease is based on data collected during this study. It has received much attention from medical professionals as well has the popular media, and has been featured on “60 Minutes” and in People Magazine.

Throughout the second half of the last century, Framingham Union Hospital continued to grow, responding to the needs of Framingham and surrounding communities. In 1980, a 50,000 square foot addition was added, and the Cancer Care Center opened in 1986. In 1991, the new Women’s and Newborn unit opened, followed by the MetroWest Cardiac Center. Expansion and investment in technology has continued into the 21st century, most recently in 2018 with the addition of robotic technology and 3D mammography. 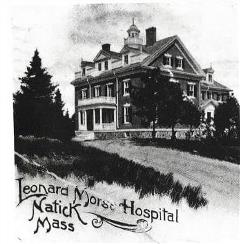 Leonard Morse, a descendent of one of the oldest families in England, arrived and settled with his family in Natick, Massachusetts. Morse was a trained shoemaker who established a shoe factory on South Main Street, and eventually constructed the Masonic Block, where his business ventures quickly made the Morse family one of the wealthiest in town.

Sadly, Mary Ann Morse, Leonard’s wife, passed away in in 1891, and left approximately $150,000 to the inhabitants of Natick for the purpose of establishing a hospital. In 1893, just over 27 acres of land were selected for the hospital site and construction began, culminating in the opening of the original 12-bed hospital in 1899, and resulting in 87 admissions the first year.

Through donations from local families and hospital trustees, an additional $27,500 was raised to build a 1917 addition to the hospital. This one-story expansion added 19 beds, primarily used for maternity & the nursery. In 1925, the hospital added their first motor-driven ambulance to their list of equipment to improve service to the community. 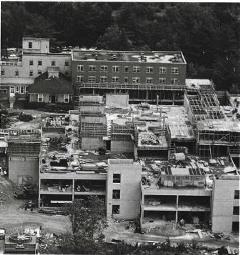 New technologies were introduced to Leonard Morse Hospital during this time of continued expansions. Dr. Charles E. Hills was able to secure a modern X-Ray machine for the hospital in 1938. Miss Marion Jackson, superintendent of the hospital, also announced at this time that the hospital was affiliated with the Household Nursing Association in Boston, and the supportive Ladies Aid Association had very successful fundraisers in which they were able to purchase new beds and install awnings for the hospital

While expansions to the hospital continued thru the 1950’s, in 1964 a study was done by the town resulting in a recommendation that a new, larger hospital be built. A building committee was appointed in 1965, and after breaking ground in 1967, a new hospital was dedicated on June 7, 1969. However, by 1974 the hospital was again at capacity and a $3.3 million dollar expansion was granted by the State Public Health Council. This expansion added 32 more medical-surgical beds, an 18-bed mental health unit, another five X-ray exam rooms and four more intensive care beds. 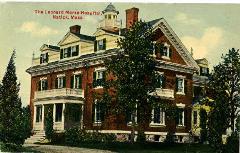 During the ensuing years, Natick as a community has continued to grow and needs have changed. In response to this, in 1989 Leonard Morse Hospital officially opened their Family Birthplace, added a more comprehensive paramedic service, created START (an addiction & substance abuse treatment program) and more. Services have continued to expand through the present, and the hospital boasts a well-known joint replacement program, a recognized bariatric program, behavioral health service, primary stroke center and more. 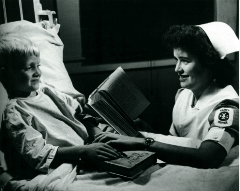 The administrations and governing boards of Framingham Union Hospital, located in Framingham, MA, and Leonard Morse Hospital, located in Natick, MA, only five miles apart, began discussions in 1991 to combine the two hospital and create what is known today as MetroWest Medical Center. A special signing ceremony was held on December 30, 1991 to mark the event and a special time capsule was sealed at the ceremony. Today, the combined campuses of 232 beds provide MetroWest communities with high quality care close to home. The Health System has been recognized for its quality of care by Healthgrades as a “100 Best Hospital” in 2018.

MetroWest Medical Center proudly celebrates 125 years of service and dedication to generations of families, and looks forward to serving many more.